Explore our impact areas and learn about our grantees.

A five year-old receives his diploma at a Waterford Upstart graduation ceremony for parents and their children in Mississippi.

Waterford Upstart is a program that helps all children develop the foundational literacy skills they need to be ready for kindergarten. The program consists of adaptive software for children and coaching for parents – all in the year before a child starts kindergarten, all at home, and all at no cost to families. Children use Waterford Upstart’s adaptive reading software just 15 minutes a day, five days a week. Coaches provide parents with advice on how to support their child’s development.

The problem it addresses

As the study points out, these achievement gaps are concerning: math and reading abilities at kindergarten entry predict later school success, and children who enter kindergarten already behind are unlikely to catch up.

Why we believe in it

Rigorous third-party evaluations demonstrate that Waterford Upstart closes these gaps and enables all children to enter kindergarten ready to learn and thrive. A 2017 randomized-controlled trial (RCT) by the Evaluation and Training Institute showed “strong empirical evidence of Waterford Upstart’s effectiveness in preparing preschool students to enter kindergarten” relative to a control group (effect sizes of 0.42 and 0.38 in literacy and math, respectively; please see this study for more information on interpreting effect sizes in education).

A longitudinal study released by the Utah State Office of Education demonstrated that these gains are lasting, with Waterford Upstart children outperforming their peers on state standardized tests in reading, math, and science through third grade (the highest grade the children had achieved at the time of the study). 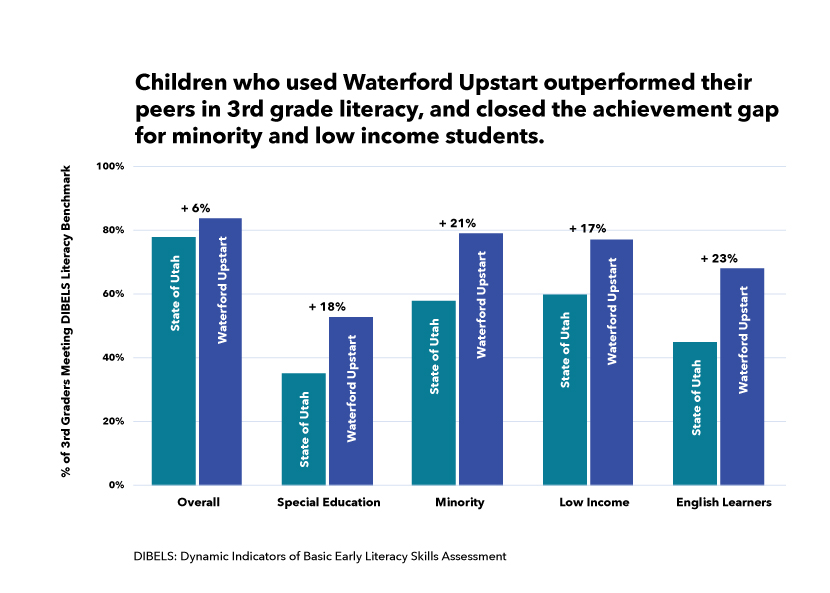 Finally, state, district, and community leaders see Waterford Upstart as an important and affordable way to ensure their children enter kindergarten ready to learn. Costing as little as $850 per family at scale, Waterford Upstart has been implemented effectively in a variety of urban, suburban, and rural contexts. It works as both a stand-alone program for the many children who do not have access to early childhood programs, or as a supplemental program for children whose centers want to boost their ability to engage families and support their children’s cognitive development.

“This is absolutely what we have needed in North Dakota,” said the state superintendent of North Dakota. “I’d love to see every one of our regions in North Dakota have a robust presence of Waterford Upstart.”

“Waterford Upstart is making a tremendous difference,” said the superintendent of Marion County School District in South Carolina. “It becomes a savings because you don’t have to remediate or intervene [later on]. You are off to a great start.”

In 2022, Waterford Upstart served approximately 45,000 children through state and district funding, a Federal Education, Innovation and Research (EIR) Grant, and philanthropically funded programs, up from 16,000 children three years ago.

Waterford Upstart is poised for significant growth, with plans to reach 75,000 children annually by 2025.